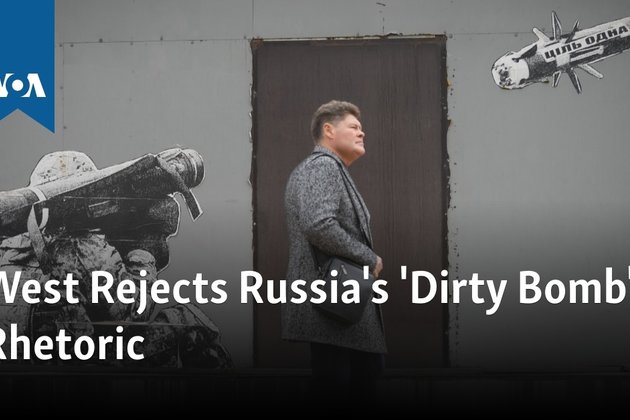 Western countries accused Russia Monday of plotting to use a threat of a bomb laced with nuclear material as a pretext for escalation in Ukraine.

Meanwhile, Moscow reiterated its claims Monday, that it is Ukraine who is planning to detonate ‘a dirty bomb’ – something Kyiv has strongly denied.

As Ukraine advances into Kherson, pressure is mounting for Russia, who told 60,000 people there ‘to save your lives’ and flee a Ukrainian counter-offensive.

In calls with his French, British and Turkish counterparts Sunday, Russian Defense Minister Sergei Shoigu discussed the ‘rapidly deteriorating situation,’ and leveled accusations that Ukraine is planning on using a ‘dirty bomb.’

In a joint statement, the foreign ministers of France, Britain and the United States said they had all rejected the allegations and reaffirmed their support for Ukraine against Russia.

‘Our countries made clear that we all reject Russia’s transparently false allegations that Ukraine [is] preparing to use a dirty bomb on its own territory,’ they said. ‘The world would see through any attempt to use this allegation as a pretext for escalation.’

The chairman of the Joint Chiefs of Staff, General Mark Milley held a phone conversation with Russian General Valery Gerasimov, the chief of the Russian General Staff, the defense ministry said in a statement. It also said both sides agreed on the importance of maintaining open channels of communication.

Readmore : Letter: Do Alberta and Sask. want to be the laughingstocks of Canada?

Ukraine has rejected Russian allegations that Ukrainian forces might detonate a radioactive device and accused Russia of planning to carry out such an act and blame it on Ukraine.

‘Russian lies about Ukraine allegedly planning to use a ‘dirty bomb’ are as absurd as they are dangerous,’ Ukrainian Foreign Minister Dmytro Kuleba tweeted.

Ukrainian President Volodymyr Zelenskyy said during his nightly address Sunday that Russia was the only one in the region capable of using nuclear weapons.

‘If Russia calls and says that Ukraine is allegedly preparing something, it means one thing: Russia has already prepared all this,’ Zelenskyy said. ‘I believe that now the world should react in the toughest possible way.’

Meanwhile Russia is continuing its rhetoric against Ukraine.

A ‘dirty bomb’ is a device that uses conventional explosives to scatter radioactive material. The U.S. Nuclear Regulatory Commission says most dirty bombs ‘would not release enough radiation to kill people or cause severe illness,’ but could create panic and contaminate property. Nuclear bombs, by comparison, have explosions that are millions of times more powerful, according to the NRC.

U.S. House of Representatives Speaker Nancy Pelosi said Monday, that Iran was making the world less safe by supplying Russia with drones to be used against targets in Ukraine.

‘I think Iran is making a big mistake,’ Pelosi said after meeting Croatia’s Prime Minister Andrej Plenkovic. ‘First of all, we have to be able to counter the drones… it is a dangerous technology and it must be stopped,’ she said.

Pelosi arrived in Zagreb Monday to attend ‘The Crimea Platform Summit,’ on Ukraine’s independence and the return of the Crimean Peninsula to Kyiv since its annexation by Russia in 2014.

‘We’ve been trying for a while now to have a nuclear agreement with Iran so that we can make the world a safer place and now they’re going off aiding the Russians and making the world a less safe place,’ Pelosi said.

Russia’s invasion of Ukraine entered its eighth month on Monday.

Pelosi has been a strong supporter of providing aid and military assistance to the country since Russia invaded February 24 in what it has called a ‘special military operation.’

Iran has denied supplying drones to Russia for use in Ukraine and condemned a call by Britain, France and Germany for the United Nations to investigate whether Russia used Iranian made attack drones.

Iran will not remain indifferent if it is proven that its drones are being used by Russia in Ukraine, foreign minister Hossein Amirabdollahian was reported as saying by Iranian state media Monday.

‘If it is proven to us that Iranian drones are being used in the Ukraine war against people, we should not remain indifferent.’ He also said that the defense cooperation between Tehran and Moscow will continue.

Some information for this story came from The Associated Press, Agence France-Presse and Reuters.

What is a bomb cyclone?