Strictly star Helen Skelton returned to the dancefloor this weekend – and her dazzling Cabaret-inspired outfit most certainly won us over in the style stakes.

On Saturday, the TV star revived her head-to-toe black ensemble for her latest appearance in Birmingham as part of the Strictly Come Dancing Live Tour.

Helen looked as sensational as ever in her alluring ensemble which featured a satin, lace-up corset, gem-encrusted mini shorts, racy black stockings and a pair of heeled velvet boots.

In terms of hair and makeup, the former Blue Peter presenter styled her luscious blonde locks into 1920s finger waves for some added va-va-voom. Helen completed her bold look with defined brows, dewy skin and a hint of sparkle.

Helen looked flawless on the dancefloor

Over on Instagram, the official page for Strictly’s live tour shared a striking photograph of Helen and Kai, her new dance partner, nailing a group dance position.

Readmore : Will Smith is on ‘probation’ with Black Hollywood. But it may not last much longer

Readmore : Will Smith is on ‘probation’ with Black Hollywood. But it may not last much longer

In the caption, Strictly’s social team penned: “The winners tonight for the final performance in @utilitaarenabirmingham were… @helenskelton and @kaiwidd. Congratulations on your second win of the tour! Next stop @nottinghamarena!”

Fans and friends raced to heap praise on the dancing duo, with one writing: “Helen & Kai were utterly amazing on Saturday night,” while a second remarked: “Helen was my winner.” 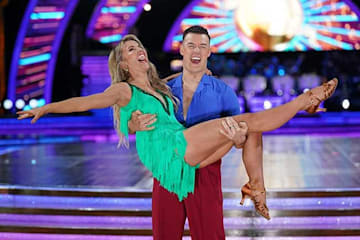 The star with her new dance partner, Kai Widdrington

“An absolutely amazing night, everyone was just FAB-U-LOUS!” enthused a third, and a fourth added: “WELL DESERVED! MY WINNERS ALWAYS”.

Helen’s spectacular performance comes after she opened up about being partnered with professional dancer, Kai Widdrington. After being coupled up with Gorka Marquez for six months, the celeb explained how it would be “difficult” dancing with a brand new partner.

“It’s really difficult not to be with Gorka because we’re such good friends,” she told The Sun. “I’ve been asking him for advice a lot, so it feels like he’s here. I’d have loved for him to do it, but it’s almost like he’s in the group.”

Despite the partner switch, Helen is looking forward to spending time with the Strictly family. “It’s such a tight knit group in the studio anyway,” she added. “We all talked and all had a laugh so it’s different, but it wasn’t a worry and like, ‘Oh my god what’s going to happen.’

“We knew each other from the series, we all hung out and spoke a lot. I was very lucky Kai was able to do it.”

Review: If the Razzies included theater, ‘Invincible’ would be one of 2022’s big winners

Shay Mitchell on ‘Something From Tiffany’s’ — and her own baggage