Memphis, Tennessee was shrouded in sorrow on 22 January, as Lisa Marie Presley was laid to rest in Elvis Presley’s Graceland estate.

However, a bright light came by way of her daughter, Riley Keough, and her husband, Ben Smith-Petersen, who confirmed to the world during the memorial that they had welcomed their first child together, a baby daughter.

News of the child’s arrival was confirmed when Ben – who hails from Australia and works as a stuntman – read a eulogy on behalf of his wife, and quoting her, said: “Thank you for showing me that love is the only thing that matters in this life. I hope I can love my daughter the way you loved me, the way you loved my brother and my sisters.”

You are reading: Riley Keough and Ben Smith-Petersen’s relationship timeline as they confirm the arrival of their baby girl

Riley and Ben met on the set of Mad Max: Fury Road, which was filmed in Australia and released in 2015. The actress starred in it alongside Charlize Theron, Tom Hardy, Nicholas Hoult, and Zoë Kravitz.

Speaking with USA Today in 2016, she recalled: “We only started dating after we did re-shoots in Australia because the crew is smaller and I got to meet him.”

She explained how their union was truly meant to be, adding: “Two weeks into dating him, we were at a gas station and I was like, ‘I could see myself having kids with this person.’ It was kind of like I knew I was meeting my husband. It was very cool.”

The two have been together for nearly a decade

Previously, the granddaughter of the late King of Rock was briefly engaged to actor Alex Pettyfer in 2012.

Readmore : Matt Hancock’s I’m A Celebrity 2022 teaser compared to The Shining while being roasted on Good Morning Britain

They became engaged in August of 2014, going on to tie the knot in February of 2015 at a ceremony in Napa Valley, California, which was attended by stars such as Dakota Johnson, Kristen Stewart, and Cara Delevigne. 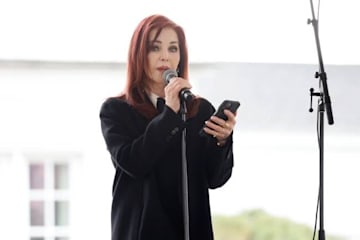 Priscilla also read a poem on behalf of her granddaughter

In an interview with Town & Country a month after their nuptials, the first-time mom gushed: “I’m so excited! He’s the one! We’re going to be together forever,” maintaining that marriage was “the right thing” to do for them, while adding: “I want to have children with Ben, and I know we’ll always be close. That’s what you want anytime you get married.”

As well as becoming adjusted to life as first-time parents, Riley is currently preparing for the highly-anticipated release of the book-to-television adaptation of Daisy Jones & the Six, which has been in the works for nearly three years.

Sharjah Biennial launches its 15th event, with more than 300 artworks across the emirate