Orangutans: could ‘half-Earth’ conservation save the red ape? 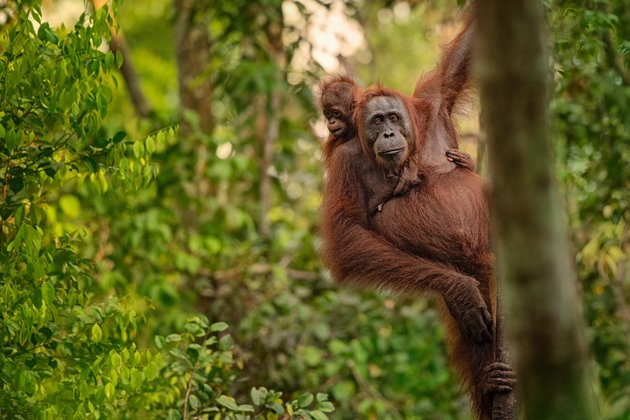 Half-Earth is a proposal by the late naturalist and “father of biodiversity”, EO Wilson. In its original context, it proposes that half of the Earth’s surface should be designated a human-free nature reserve to preserve biodiversity.

The proposal of course raises some pretty big questions. What happens to the people that happen to live in the areas designated to become human free? Would we give up on biodiversity in the other half of Earth? And whose half should be chosen and who decides? Would richer countries continue on their current path and tell poorer nations, especially those in the tropics with relatively intact forests and marine systems, that their part of the world will from now on only be for nature?

You are reading: Orangutans: could ‘half-Earth’ conservation save the red ape?

Perhaps not unexpectedly, the grand idea of half-Earth has attracted a lot of criticism as being unethical and infeasible. It has even led to a distinct counter-proposal: whole-Earth. Sometimes known as sharing the planet, this proposal focuses on things like equitable land management or finance, as its advocates argue that conservation will only ever work if we change the political and economic systems that are driving today’s crises.

It is difficult to judge the merits of half and whole-Earth without testing what either would mean on the ground. This is what we recently set out to do by applying our interpretations of these two options to the conservation of an animal we have studied for decades – the orangutan.

We focused on Borneo, the world’s third largest island (only Greenland is significantly larger) and home of most orangutans. The Bornean orangutan is listed as “critically endangered” as its habitat is being destroyed and many are killed for food, for profit or simply because people fear them (direct killing remains a major problem on a par with deforestation).

We gathered a group of 33 other experts, mostly scientists with a specific track record of estimating orangutan population sizes. They were then asked (confidentially) what would happen to Bornean orangutans in the next decade under half- and whole-Earth conditions (translated as half and whole-Borneo) compared to continuing business-as-usual conservation practices. Our results are now published in the conservation journal Oryx.

The experts predicted that business-as-usual would mean the total population of orangutans on Borneo would decline by around 27% between now and 2032. That is clearly not sufficient to support the protection of the species.

Half-Earth was predicted to strongly reduce orangutan declines. The experts, in fact, concluded that it would be comparatively easy to achieve and would reduce population decline by at least half compared to current management.

However, the experts thought whole-Earth would lead to greater forest loss and ape killing and a 56% population decline within the next decade. Whole-Earth approaches are valuable but may not be workable for the short-term orangutan conservation needs, because of political and economic realities on the ground.

The good news is that the experts predicted that, if orangutan killing and habitat loss were stopped, populations could rebound and reach 148% of their current size by 2122.

Despite more than 100,000 orangutans lost over the past two decades, the experts now see glimmers of hope. Indonesian and Malaysian deforestation rates are down, as are expansion rates of oil palm and other crops. How should orangutan conservation proceed from here? What are the best strategies?

Interestingly, both the Indonesian and Malaysian governments had more or less reached the objective of legally designating half of the land mass as protected in their respective states of Kalimantan and Sabah.

Readmore : Ocasio-Cortez: ‘I’m not here to sell people’ on idea Democratic leadership ‘is the same as you or me’

This is all on paper though, and a lot of effective conservation investment and management would be needed to ensure that these orangutan habitats would indeed remain permanently forested, and that the other key threat – killing – is effectively addressed.

This is where elements of the whole-Earth approach are helpful, as it might prompt a more sensitive and equitable engagement with rural communities. Communities need to be given responsibility for coexisting with orangutans and there must be incentives to protect orangutans and their habitats. And companies – logging, mining, or plantations – need to be made legally responsible for ensuring that the protected orangutan can survive and thrive on the lands that they manage. Ultimately, we need to protect both orangutans and humans’ rights and access to their customary lands.

In the case of orangutans, half-Earth seems to be a good idea in the short term, especially with regard to habitat loss. Whole Earth-type approaches might be needed in the longer term to ultimately ensure a reduction in the number of orangutans who are killed or have to be captured and relocated.

Neither approach is likely to provide a silver bullet. Every conservation context is going to be different and will require its own specific solution. It is therefore also important to just get on with conservation and not spend too much time thinking about ideal solutions.

It is not an easy path ahead, but solutions exist that can ensure the long-term survival and even recovery of the Asian red ape.

The Hill’s Morning Report — In Washington, Zelensky appeals to Congress for aid