Goldie Hawn and Kurt Russell have been together for nearly four decades, but the couple are still not in any rush to tie the knot.

After getting together following a romantic Valentine’s day date in 1983, the Overboard stars have become one of Hollywood’s favourite couples but have never married. However, the couple did tease that an engagement was on the cards at the Oscars in 1989.

You are reading: Goldie Hawn and Kurt Russell’s relationship timeline ahead of milestone anniversary

While the actors keep relatively private, Goldie, who has shared an LA home with Kurt for many years, takes to social media from time to time to offer fans delightful insights into the pair’s strong bond.

When did Goldie Hawn and Kurt Russell start dating?

The actors started dating 39 years ago in 1983, although the two were already friends before then.

Goldie met Kurt for the first time when they were both filming the 1968 Disney musical The One and Only, Genuine, Original Family Band. The couple then reconnected years later while filming another movie together, Swing Shift.

Talking with magazine, Kurt recalled being impressed with Goldie’s appearance on set.

“Then you get to know somebody,” the Elvis star added, “And you begin to find that, yeah, you do share things in common deeply… it goes where it goes.”

Goldie and Kurt began dating in the 80s

Speaking on BBC Radio 4 in 2017, Goldie revealed that the actor who is five years younger than her made quite an impression when they first met: “I thought he was adorable, but he was much too young,” she admitted. “Then, years later, we met up again, and I remembered that I liked him very much when I first met him.

“We both said we would never go out with another actor so it just shows you never can tell,” she added amused.

While the actors seem quite laid back about the enduring success of their relationship, the fact that they scheduled their first date on Valentine’s Day 1983 at the Playboy Club suggests they might have predicted its huge potential. Regardless, the occasion has certainly led to some very romantic anniversaries. 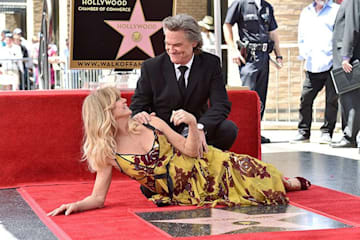 Goldie and Kurt have been together for almost 40 years

Since their meeting and later getting together with the help of two different film productions, the couple have gone on to share the screen together three more times, most recently in Netflix’s The Christmas Chronicles 2.

Are Goldie Hawn and Kurt Russell still together?

Yes, Goldie and Kurt are still completely besotted with each other. The pair’s love has been going strong now for almost 40 years.

In 2007 Goldie revealed what she felt was the secret to the two’s successful relationship in an interview with Women’s Day.

“I think the secret is to know when to depend on somebody and when not to. It’s important that you are able to hold up your side of the house,” the A-lister detailed. “I believe that one person can’t bear the whole burden because then their shoulders start getting heavy.” 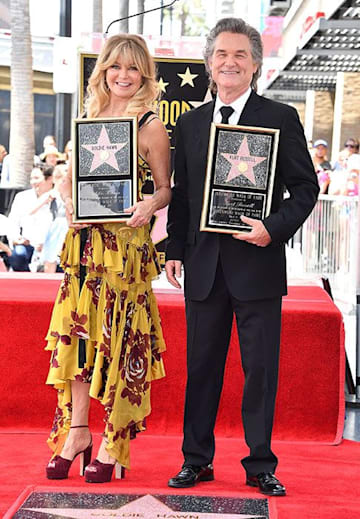 The Hollywood superstars both have stars on the walk of fame

She continued: “The other part is to stay as sexy as you can and make sure you focus on all of those aspects of a healthy relationship — and sexuality is definitely one of them.”

In a later interview with E! News the actress added a surprising additional secret to the pair’s long-lasting love. “The secret to my romance is separate bathrooms,” she revealed.

Why did Goldie Hawn not marry Kurt Russell?

Having been together for almost 40 years, The Christmas Chronicles stars sometimes baffle fans with the fact they haven’t chosen to get engaged and married. However, the acting couple have regularly opened up about why they are happy the way they are.

Speaking on Loose Women in 2015, the actress revealed her feelings on tying the knot: “I would have been long divorced if I’d been married,” Goldie said.

WATCH: Goldie and Kurt loving life together as a non-married couple

She continued to speak about the issue in her interview with Porter in 2015: “A lasting relationship isn’t about marriage,” she said. “It’s about compatibility and communication. And you both need to want it to work… 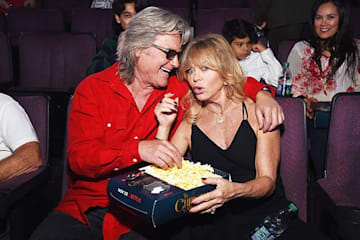 Goldie and Kurt have certainly made their relationship work

“It’s also about not losing yourself in each other. Being together, two pillars holding up the house and the roof, and being different, not having to agree on everything, learning how to deal with not agreeing. Everything’s a choice,” she elaborated.

The Academy award-winning actress’ thoughts were echoed by Kurt in a 2020 interview with People. “For people like us, the marriage certificate wasn’t going to create anything that otherwise we wouldn’t have,” he said.

Who are Goldie Hawn and Kurt Russell’s children?

The A-listers share one child together, actor and former ice hockey goalie Wyatt Russell. The duo were also very involved in raising Goldie’s son and daughter (actors Oliver and Kate Hudson) from her previous marriage to Bill Hudson, and Kurt’s son Boston from his marriage to Season Hubley.

The pair recently posted an adorable throwback photo to their happy life as a blended family in the 80s on Instagram. 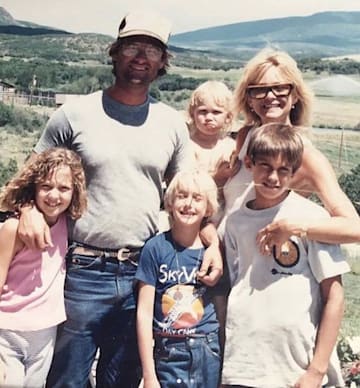 Speaking to Australian Women’s Weekly in 2022 Goldie gushed about the joys of her large family.

Goldie and Kurt are super adoring parents and grandparents

“I look at our kids and grandchildren and there’s nothing in the world that could make me as proud as I am of all of them,” the 77-year-old said.

“A good family is the answer to happiness”, she added. “Being a grandmother is amazing, I love it. It brings incredible joy. Family is so important.”

The Hill’s Morning Report — In Washington, Zelensky appeals to Congress for aid