Even after nearly thirty years together, the spark between Christopher Meloni and his wife Sherman Williams is nowhere near fizzling.

The Law & Order star is still treating his wife like they are in their honeymoon period, and it appears she is still dressing up as she must have when they met!

Sherman left fans of her husband shocked – but thoroughly impressed – with her latest outfit, as she stepped out in massive heels to celebrate her birthday.

You are reading: Chris Meloni’s wife impresses his fans with her head-turning birthday look

Chris took to Instagram to gush about his wife – and her sultry birthday look – sharing first a close-up photo of her legs looking fabulous in black, sky-high peep-toe pumps.

He went on to share all of the fun details of their seemingly wild night out, including his wife excitedly putting on her impossibly high heels, looking like a true birthday queen with a crown on, and a sweet moment in which he is captured lifting her up to spin her around.

Readmore : Harrison Ford will be ‘de-aged’ in ‘Indiana Jones 5’ to look like first film

The two went all out to celebrate her 63rd birthday, and the actor shared another video revealing they partied all night with their two kids, Dante Amadeo and Sophia Eva Pietra. He also included a video of his kids having a blast at a club as Funky Town by Lipps Inc. was blasted from the speakers.

A family that parties together stays together!

“So…this happened. My gurl. Ageless. Timeless. Steppin’ out with the young-uns to show em how it’s done,” Chris cheekily wrote in the caption.

His fans were quick to gush about the glimpse into their celebration in the comments section under post, praising Sherman for her choice in shoes. 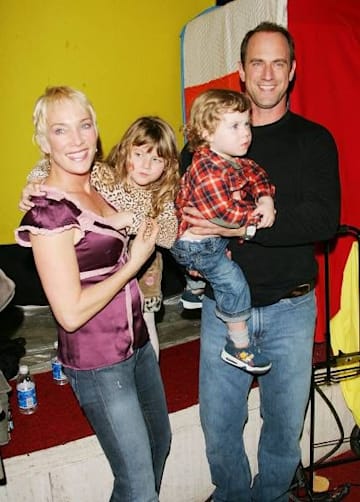 Chris and Sherman raised their kids between Connecticut and New York

“God bless her for wearing those shoes,” one fan commented, as others said: “I broke my ankle just looking at the first picture,” and: “I just know she showed them all up. Those heels!!” as well as: “She’s the hottest one in the room!”

The longtime couple married in 1995 and welcomed both of their kids, who are twenty-two and nineteen, through surrogacy. The father-of-two’s co-star and good friend Mariska Hargitay is his daughter’s godmother.