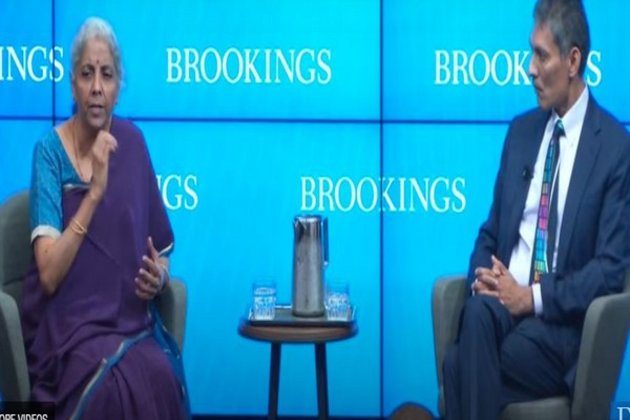 Sitharaman also said that India is holding consultations with different countries to make RuPay acceptable in their nations.

“We are talking to different countries. Singapore and UAE have all come forward now to make Rupay acceptable in their countries,” Sitharaman said at the Brookings Institute think-tank during a fireside conversation with eminent economist Eshwar Prasad.

“Not just that, the UPI (Unified Payments Interface), the BHIM app, and NCPI (the National Payments Corporation of India) are all now being worked in such a way that their systems in their respective country, however, robust or otherwise can talk to our system and the inter-operability itself will give strength for Indians expertise in those countries,” she said.

Meanwhile, amid the ongoing conflict in Ukraine, Sitharaman asked developed nations to take responsibility for the global spillover caused by policy decisions taken by them.

Readmore : Saudi Arabia’s FII summit showed the role of a middle power in a bipolar world

The minister said in her written remarks hit out at the developed countries for imposing sanctions on nations who are merely fulfilling their moral and democratic obligations to their people.

“International cooperation is needed more than ever is to state the obvious. In the near-term, advanced nations must take responsibility for the global spillover of their political and economic policy decisions and put in place safety nets rather than impose sanctions on nations who are merely fulfilling their moral and democratic obligations for their people,”These comments come as India continues to be the fastest-growing major economy in the world. In its July 2022 report, the IMF had pegged India’s GDP growth for 2022 at 7.4 per cent.

The IMF’s latest projection on India’s GDP growth is lower than the 7 per cent growth pegged by the Reserve Bank of India (RBI) for the financial year 2022-23. However, despite the slowdown, India would remain the fastest-growing major economy.

As India prepares to accept the Presidency of the G-20 grouping of nations, Sitharaman said “India is ready to do whatever it can to facilitate dialogue, discussions and decisions on these critical issues.”During her address, she pointed out several factors that underpin India’s growth story, including digitisation and financial inclusion, strengthening the MSME and improvement in the quality of government spending with an emphasis on capital expenditure and targeted social security support for the needy.

Explaining India’s growth story, the finance minister said, “India as a developing nation has always stood ahead for the growth of the global commons.””India’s commitment to multilateralism is evident by the initiatives we have taken to supply vaccines to over 100 nations, provide disaster relief to those in distress, and partner with other countries, with a focus on green growth, better connectivity, digital delivery and accessible health,” she added.

Sitharaman is on an official visit to the US. During her visit, she will be attending the Annual Meetings of the International Monetary Fund (IMF) and the World Bank, the G20 Finance Ministers and Central Bank Governor (FMCBG) Meetings.

During the later part of the visit, the Union Finance Minister will attend roundtable meetings with USIBC and USISPF on themes to ‘Strengthen Investment and Innovation in India-US Corridor’ and “Investing in India’s Digital Revolution”.

These meetings with leading business leaders and investors are aimed at highlighting India’s policy priorities and deliberate on measures to facilitate foreign investment by showcasing India’s attractiveness as an investment destination. (ANI)

The lottery: Which states’ residents spend the most on tickets and scratch-offs?