Queen Consort Camilla stepped out in Ascot on Saturday morning to attend their November racing weekend with Ebony Horse Club – and it’s safe to say the engagement got royal fans talking.

You are reading: Royal fans are all saying the same thing about Queen Consort Camilla’s latest royal outing

The wife of King Charles III, 75, was a vision at the event which saw her don an elegant forest green coat and fur hat as she was pictured with students from the club, who told her about their brilliant experiences.

The charity, which is based in Brixton, is dedicated to providing youngsters with key life skills through the riding of horses and learning horsemanship skills. Camilla has been involved with the organisation since 2008.

Taking to the comments section of a selection of photos from her time with the charity, fans agreed unanimously that the Queen Consort was doing a splendid job! One fan wrote: “Nice photos! Queen Camilla is such a lovely lady.”

A second added: “One of my favourite charities supported by Her Majesty!!! Such an amazing initiative that has certainly made a huge difference for many young people,” alongside multiple red love heart emojis.

The string of images, shared on the official Instagram account for the royal family, not only showed the Queen Consort’s latest outing with the group but also from years gone by, including a touching photo with the late Queen Elizabeth II.

Alongside the photos was a caption that read: “This morning, Her Majesty The Queen Consort attended Ascot’s November Racing Weekend with Ebony Horse Club. 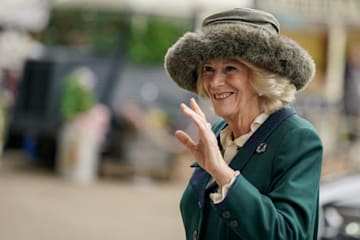 The Queen Consort looked very glamorous for the event

“The Queen Consort, who has been involved with the charity since 2008, heard from ten students, who spoke about their fantastic experiences with @EbonyHorseClubBrixton. Following this, four students were invited by Her Majesty to the Royal Box to watch the third race of the day.

“Ebony students were responsible for judging the ‘Best turned out’ of ‘The Coral Hurdle Race’ on behalf of Her Majesty, who later presented trophies to the race winners. Ebony Horse Club is a charity and community riding centre in Brixton, where riding and horsemanship are used as tools to develop and improve key life skills.

“The charity was founded in 1996 and the centre in Wyck Gardens opened in 2011. Today, Ebony has 10 horses and serves over 150 riders per week. In 2022 alone, the charity has hosted close to 2000 rides, trips and activities for members and the local community.”

The lottery: Which states’ residents spend the most on tickets and scratch-offs?