Harper Beckham clearly shares a tight-knit bond with her dad David Beckham and she recently showcased their close relationship in the sweetest way. The youngest member of the Beckham clan sent a message of support to her father who is currently in Qatar for the World Cup – and fans think it’s uber cute.

You are reading: Harper Beckham shows support for dad David in the sweetest way

The 11-year-old baked a cake in honour of her dad, which displayed the words: “Daddy,” in pink icing sugar lettering. The cake, which appeared to be chocolate, was crafted by Harper with the help of her mum Victoria – who shared the photos via her social media.

Victoria shared the images with her fans, alongside the caption: “A nice cake for Daddy,” followed by: “Harper made this not me.”

Readmore : Assessment: ‘Lady Image’ invitations you alongside on a swooning trip of teenybopper ardour

Harper also prepared a plate of milk-chocolate-coated strawberries which were served on a plate next to a bouquet of flowers. Very picturesque. 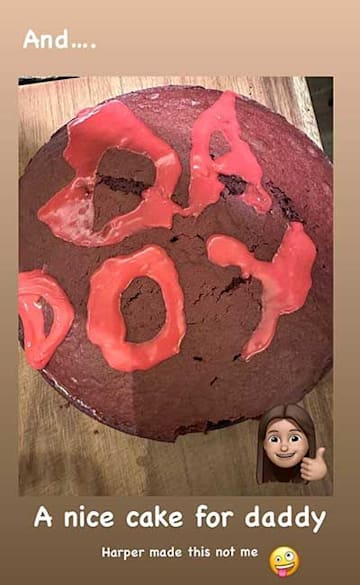 Clearly, a penchant for cooking runs in the Beckham veins. Harper often hits the kitchen with David to cook together.

Previously, Victoria has given fans a glimpse inside her morning routine at £31million London home with her youngest child, who was seen standing at the hob alongside dad as he coached her about how to make the perfect boiled egg, ready for a hearty pre-school breakfast.

Looking incredibly proud of herself, Harper beamed at her mum behind the camera as she announced: “Harper is cooking eggs with daddy.”

“Breakfast with the Beckhams,” penned Victoria. “(Good job Harper is learning from daddy and not me!)” she added, admitting the cooking is often left to David in the Beckham household.

Their oldest son Brooklyn is also an aspiring chef and recently divided fan opinion with a new recipe. The 23-year-old teamed up with Bustle for the feature, saying on the video that he is “very experimental” when it comes to cooking and likes to try making “new drinks”. He then admits: “I’m a nutter in the kitchen.”

Emily Blunt pivots to TV in Western drama ‘The English’