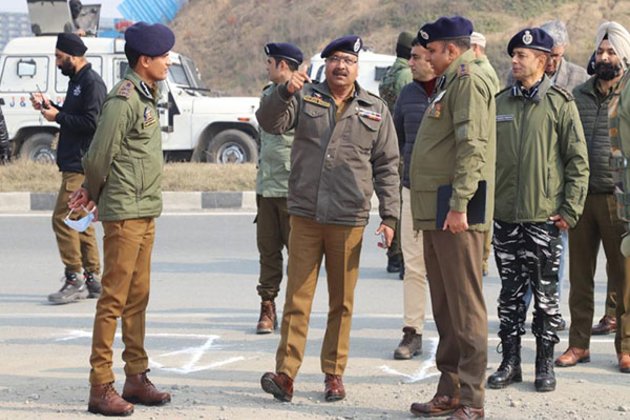 Anantnag (Jammu and Kashmir) [India], November 24 (ANI): Jammu and Kashmir Director General of Police (DGP) Dilbag Singh on Wednesday said that the number of active terrorists in South Kashmir is currently at record low. He emphasised that society denounces inhuman acts but those involved in heinous terror acts need to be stigmatised.

DGP Singh said that public goodwill has supported the forces in its peace mission. He said that forces need to work hard to finish the remaining terrorism. He directed the officers to review their action plans and take immediate steps to neutralize the terrorists adding that the hybrid terrorists need to be taken to task. He said this year so far over 100 modules of hybrid terrorists were smashed.

While giving thrust on minimizing and neutralising security threats, the DGP said that indoctrination by Pakistan terror handlers is going on and they are using various media especially social to brainwash the vulnerable youth of J-K. He said there are over ground workers (OGW) who help the Pakistan handlers in executing terror acts.

He exhorted that different stakeholders of security and government have to work together to save the vulnerable youth from falling into the trap of Pak terror handlers. He said that forces need to hit harder on terrorists and their promoters in order to maintain long-lasting peace. He directed Jurisdictional officers to take necessary measures to demolish the network of the drug trade. He directed to investigate all important cases related to UAPA and NDPS adding that disposal of such cases must be the top priority.

The DGP Singh directed the Commandants of CAPF, JKAP, IRP and district Police officers to sit together and review all measures taken for providing security to vulnerable pockets of the populations and also of religious places while keeping in view their sensitivity. He stressed increasing day and night patrolling in different areas and also directed for discussing requirements of quick response teams (QRT) and deployment of forces and area dominations on regular basis between senior ranks of the jurisdiction.

The DGP also discussed winter preparedness and stressed upon officers to look into all aspects of providing better facilities to jawans and directed them to take all measures for the welfare of personnel.

Speaking to the media at Anantnag, DGP Singh said that the security review meeting was aimed to take stock of the security situation and police response to crimes particularly to the unlawful and NDPS activities in the three districts of South Kashmir adding that it is a regular process of assessing the security scenario on different fronts.

He said that the security situation of South Kashmir is getting better and the crime scenario is also under control.

He said that J-K Police along with Army and other security forces are working tirelessly for peace in J-K adding that the dividends of which are quite visible on the ground.

With regard to the terror attacks on civillians, Singh said elements who were involved in such inhuman acts were mostly neutralized adding that society has denounced these acts. There has been condemnation of these acts but there is a need to stigmatise those involved in heinous terror crimes, he stressed.

DGP Singh said, “If non-locals come here to earn livelihood and provide help in the economic growth of people , it is our responsibility to protect them and provide them a secure atmosphere.”He said that number of both foreign and local terrorists is in two digits and the number of active terrorists in South Kashmir is record low at present which is a heartening development for the people as well as for the forces.

Singh said the parents, social and religious leaders must play an important role to sensitize the youth regarding the conspiracies of Pakistan and its agencies against the development and peace of J-K. With regard to the narcotics, the DGP said that J-K Police is working firmly against the trade adding that during this year hundreds of cases have been registered and those involved in the trade have been booked. (ANI)

The Monday After: Ravens trade for star linebacker Roquan Smith

What Congress is doing to diversify its staff