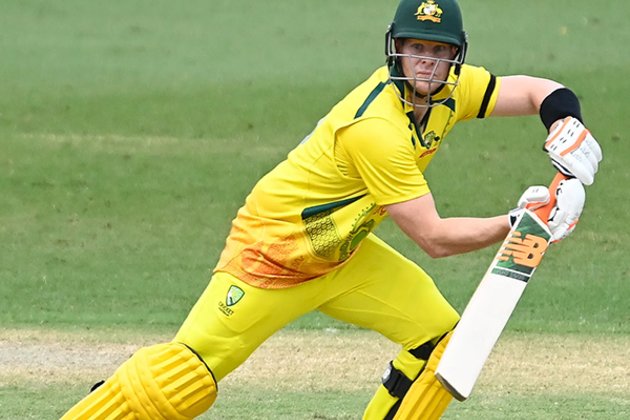 Brisbane [Australia], October 6 (ANI): Experienced batter Steve Smith feels that his style of play entails finding the gaps, timing the ball well and running hard between the wickets, which is crucial for success on Australian grounds where the T20 World Cup is to be played and hence is hopeful for a place in the squad.

The batter was left out from the playing eleven of Australia’s first T20I of the three-match series with the West Indies. The Aussie team went on to win the nail-biting match with three wickets to spare in the final over.

You are reading: Steve Smith still hopeful of World Cup berth, feels his style of play crucial on Australia’s grounds

Smith shared his thoughts on his way of batting and explained that his game is not only dependent on power hitting but it involves hitting the ball sweetly and finding the gaps.

“For me, I’m not as strong and powerful as some of the other guys. But some wickets entail just good smarts and punching the ball and timing the ball really well, particularly in Australia with big grounds, running hard between the wickets, that kind of thing,” said Steve as quoted by Cricket Australia.

Despite losing his berth in the T20 team, Smith still believes he will play in the upcoming World Cup since his touch game will be advantageous on Australia’s expansive fields.

Tim David and Cameron Green were both selected ahead of Smith for Wednesday’s three-wicket victory over the West Indies, which has dimmed Smith’s shine in the shortest format. Smith was a middle-order anchor in the Australian men’s team’s historic T20 victory last year.

Marcus Stoinis’ impending return to the team, most likely for Sunday’s opening T20I against England in Perth, will make it harder for Australia to choose players for the tournament opener in a little more than a fortnight.

Smith’s selection was mostly influenced by Australia’s emphasis on having bowling options in their top six.

Readmore : Graham defends ‘riots within the streets’ remark, says he tried to ‘state the plain’

“Just having that more attacking mindset rather than, when I was playing that kind of (Mr Fix-It) role, I was probably in a more defensive frame of mind and almost trying to bat through without taking the game on as much. But just having the license to go out and just play the way I want to play, and the situation that’s in front of me, I think that’s the way I play best. For me, I’m not as strong and powerful as some of the other guys,” said Smith.

Smith is conscious that he presents a qualitatively distinct selection offering than players like Stoinis, Maxwell, and David, but he has shed the ‘Mr Fix-It’ tag he had previously worn in the T20 side.

On Australian grounds, which are often larger than those abroad, his ability to knock the ball to all parts of the outfield and quick running between the wickets could be more effective than physical force.

Australia will next play on October 7 at Brisbane in the second T20I against West Indies. (ANI)