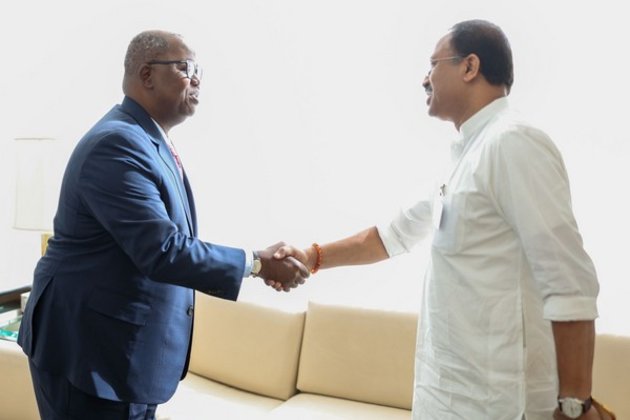 New York [US], October 6 (ANI): On the sidelines of the UNSC High-Level debate at New York, MoS for External Affairs V Muraleedharan met with the foreign minister of Gabon Michael Adamo and held discussions on various aspects of bilateral relations.

MoS tweeted, “Happy to meet FM of Gabon, H.E. Michael Adamo on the sidelines of UNSC High Level debate at New York. Useful discussion on various aspects of bilateral relations. Congratulated Gabon on assumption of UNSC Presidency in Oct 2022.”He also invited the Gabon foreign minister to the counter-terrorism committee special meeting to be held in India towards the end of October 2022.

At the UNSC debate over peace and security in Africa, MoS V. Muraleedharan highlighted that a violence-free Africa is necessary to prevent external forces including terrorists exploiting resource-rich region. Those “guilty of aiding and supporting terrorism” in different parts of Africa and simultaneously exploiting the resources must be held accountable by the international community, he added.

Minister of State for External Affairs V. Muraleedharan made these remarks during a UNSC debate titled “Peace and Security in Africa: Strengthening the fight against the financing of armed groups and terrorists through the illicit trafficking of natural resources.”In recent years, MoS said, terrorist and armed groups have been making deep inroads by exploiting security gaps and fragile governance institutions in the continent, particularly in the Horn of Africa, Sahel and East and Central Africa.

He highlighted that the terrorist groups are accentuating their funding by exploiting the resource-rich region. “These regions have remained vulnerable to money laundering and terrorist financing. Terrorist and armed groups are increasingly funding their activities through illegal exploitation of natural resources and trafficking of wildlife, and extortion, etc., amongst other well-known activities.”Pointing out the new ways used by the terrorist groups, MoS added that these outfits are financing their activities by exploiting the rapid development of information and communication technology as well as other technologies related to financial transactions, encryption, and varied modes of transportation and delivery.

The Minister said that preventing these inimical outfits from accessing financial resources, therefore, is “crucial to effectively counter their violent attacks.”MoS pointed out that while some states lack the legal-operational frameworks and necessary counter-financing of terrorism capacities, there are other states that are “clearly guilty of aiding and supporting terrorism”, and “wilfully” providing financial assistance and safe havens to terrorists.