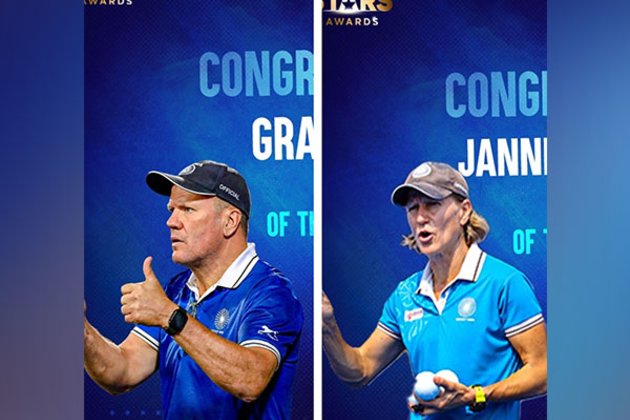 New Delhi [India], October 6 (ANI): Coaches Graham Reid and Janneke Schopman credited their teams for the award after they received the Coach of the Year Award at the International Hockey Federation (FIH) Hockey Star Awards 2021-2022 on October 6.

Graham Reid and Janneke Schopman, the chief coaches of the Indian Hockey Team, were presented with the Coach of the Year Award at the FIH Hockey Star Awards 2021-2022 for inspiring their respective squads to success during the previous year.

Chief Coach Men Graham Reid, who is now at SAI, Bengaluru preparing the core probable group for the upcoming FIH Hockey Pro League, was shocked to learn that he had won the accolade.

“I was just going for a walk and the boys just surprised me at the gym, I was absolutely unaware, even my wife was in on it, she was a part of the surprise,” expressed Reid as per Hockey India.

Reid further expressed that he was pleased with how the team has done thus far.

“I think these awards are representative of how the team plays and not the individual and I think that’s the environment I try to foster in the group. It’s fantastic to receive the award but I think it’s the whole team that has achieved it,” he said.

“The Coaches of other teams are all world-class, they have their own way of doing things and to win amongst those coaches is a big honour. I know how difficult it is and this kind of leadership at the top is very lively, you try and make pretty tough decisions each day, so I know the sacrifices they all make and I must say, congratulations to everyone who was nominated,” said Reid.

While in Rajkot, Gujarat, for the National Games, Chief Coach Women Team Janneke Schopman was also pleasantly delighted after getting the news of the award.

“It’s an honour to receive this award and I want to thank Hockey India, Ministry of Youth AffairsSports, Odisha Government, SAI and my family and staff for all their support. But the most thanks go out to the team as it’s all them. The players work hard, want to learn and always show their dedication. It’s a great pleasure to be their Coach,” said Schopman.

“It really does feel pretty amazing to win the award when you are up against some of the finest Coaches in the world. Again, the award is a recognition of what the players were able to execute on the field and I am happy the team is progressing well,” Janneke added. (ANI)