Brooklyn Beckham showed the sweetest display of support for his wife Nicola Peltz on Sunday, after she covered Vogue Turkey.

Sharing a shot of the stunning cover, which sees Nicola in a monochrome dress, tights and boots, with her long brown hair flowing loose past her shoulders, the aspiring chef wrote: “You look absolutely stunning, I love you so much and I’m so proud of you [heart emoji] can’t believe I’m married to such a gorgeous girl xx.”

You are reading: Brooklyn Beckham shows support for Nicola Peltz after she addresses ‘feud’ rumours in new interview

Nicola responded in the comments section: “I love you soooooo much.”

The sweet gesture came after the actress’s new interview with The Sunday Times was published, in which she addressed her alleged rift with Brooklyn’s mother, .

WATCH:David Beckham greets Nicola and Brooklyn with a sweet hug

Opening up about the reports, Nicola told the newspaper: “It’s not a feud! I keep seeing everywhere that word, ‘feud, feud, feud’!” She went on: “I don’t know why they say feud? I mean, maybe they picked up on something? And now they’re labelling it feud?”

Rumours swirled that Nicola and Victoria may not get along after the 27-year-old did not wear a gown designed by her new mother-in-law at her April wedding, as had been expected.

Brooklyn showed his support for Nicola

Nicola also told the publication: “No family is perfect! I don’t pay attention to all of it . . . If I did, I would go crazy.”

Back in August, Nicola and Brooklyn spoke for the first time about rumours that Nicola andVictoria don’t get along. 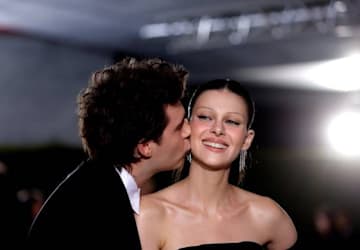 The couple are devoted to each other

Nicola told Variety that she initially intended to wear a dress designed by her mother-in-law.

She said: “I was going to and I really wanted to, and then a few months down the line, she realized that her atelier couldn’t do it, so then I had to pick another dress.

“She didn’t say you can’t wear it; I didn’t say I didn’t want to wear it. That’s where it started, and then they ran with that.”